Erik Davis|Posted On May 18, 2022|Uncategorized

Newsmakers with Jerry Roberts’ Mayoral Debate program has won first place recognition for best Virtual Event video in the Hometown Media national contest sponsored by the Alliance for Community Media, the organization that encompasses cable access stations across the U. S.

The Mayoral Debate, recorded on August 27, 2021, was hosted by Jerry Roberts (https://www.newsmakerswithjr.com) and by Josh Molina (Santa Barbara Talks https://santabarbaratalks.com).  It was produced by Jerry, Josh, and Hap Freund, at the TVSB studios (https://tvsb.tv);  Jerry and Josh were situated in the TV studio questioning the six mayoral candidates who all appeared via Zoom.  JP Montalvo of TVSB directed the award-winning cablecast.

The program was watched more than 2000 times on Newsmakers’ YouTube channel and the one for Santa Barbara Talks.  In addition, content from the debate and the video and podcast link went out via email to the more than 1,200 subscribers to Jerry Roberts’ blog letter. The video aired 124 timeson TVSB’s channels 17 and 21 and appeared in Edhat where more than 5200 people read the accompanying article.

“We are proud of our ongoing contribution to civic dialogue on important local issues,” commented Jerry Roberts.  “And it’s great to be recognized and honored for best virtual programming in a period where so many were compelled to communicate and share information through Zoom and other similar platforms.”

Josh Molina, a local journalist who also hosts Santa Barbara Talks and is a college journalism instructor, co-moderated the debate.  Josh added, “I’ve had the privilege of working with Jerry Roberts for more than 15 years.  Newsmakers with Jerry Roberts is smart, compelling, and impactful. I was honored to share the stage with him for the mayoral debate and thrilled that the show received this tremendous honor.”

Hap Freund, who has co-produced Newsmakers with Jerry Roberts since its inception in 2014, said “We’ve produced more than 200 Zoom programs since the pandemic began in 2020.  It’s gratifying to know that we’ve found an effective way to share content-based and entertaining journalism with our community and that this program has been honored nationally.  I especially want to thank TVSB for their great help in making this happen.”

The Hometown Media Awards from the Alliance for Community Media was established to honor and promote local cable programs distributed on Public, Educational and Governmental cable access channels (like TVSB).  Winning entries will be recognized at the organization’s annual conference, being held June 28-30 in Chicago.

Watch the award-winning video below. 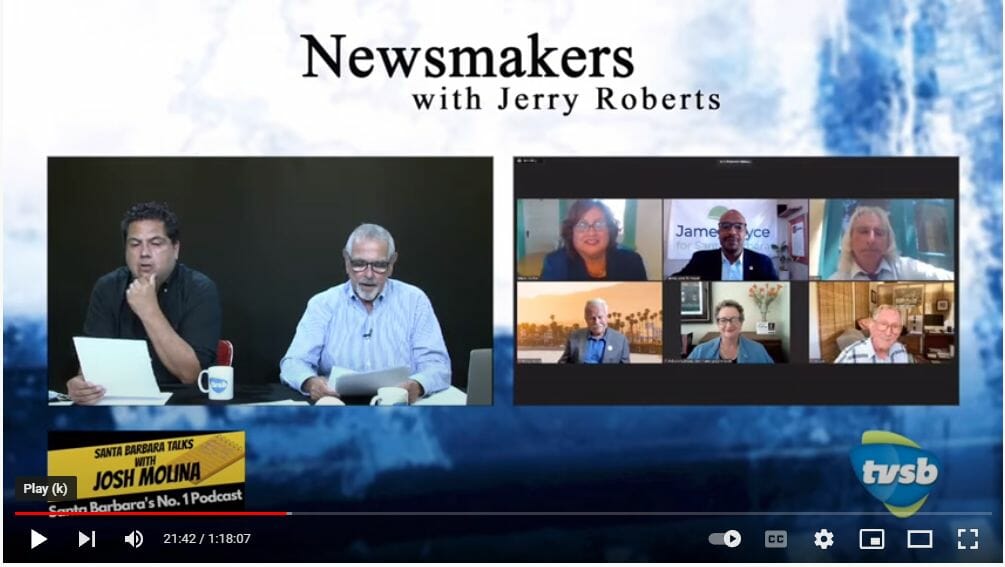